At the minute around the coast of the British Isles, seabirds are starting to gather on their cliff side breeding grounds. If you’ve ever seen a seabird colony, you’ll know that these places are an overload on the senses. You often smell them before you see them and only after you’ve really looked at them do you break the mass of noise and activity down in to individual birds, each species with their different niche on the cliff side. These seabird cities are the British equivalent of the Serengeti with over 40% of all Europe’s seabirds breeding here. 5 million of the UK’s 8 million breeding seabirds live around the coast of Scotland so we have a big responsibility to protect them.

Their nest sites are protected as Special Protection Areas (SPA) or Sites of Special Scientific Interest (SSSI) and we have a framework to protect their social, grooming congregations near the colony as SPA extensions but until recently we didn’t protect their foraging grounds. A lack of knowledge about where seabirds feed was often cited as the reason for this lack of progress on creating Marine Protected Areas (MPA) which is where a project that I worked on from 2011 – 2014 came in. This project is one of the world’s largest tracking and monitoring studies, it is still ongoing and is led by the Royal Society for the Protection of Birds (RSPB). It has involved studying 8 species of seabirds from 34 colonies around the UK.

On the ground this involved me sleeping, breathing, walking, talking seabird for 4 months each summer on the beautiful Isle of Colonsay, off the West coast of Scotland. Every dry hour of light was spent using ropes and poles to peer over the edge of cliffs to catch birds using old techniques the St Kildan’s used to catch their dinner! As we wanted to recover tracking tags and not disturb the birds breeding season we used a much more softly softly approach which involved at least 12 hours labour for every tag we retrieved. These Global Positioning System (GPS) tags have only become small enough recently to be able to carry out this work. They work like the sat-nav in your car collecting data every 100 seconds to a 15 metre accuracy to find out where the birds have gone to feed. We’ve collected over 1570 of these GPS tags creating maps that look like a jumble of spaghetti coming out from our coastline!

We’ve found out some fascinating facts such as birds are travelling much further to forage than we ever expected. Birds such as guillemots and razorbills were tracked travelling from Fair Isle, North of Shetland all the way south to Dundee to feed, a return trip taking just a couple of days. Fair Isle had a string of particularly poor breeding seasons for seabirds, it’s a poor state of affairs when birds have to travel over 300km just to get food for their chicks. This isn’t thankfully the case around the British Isles, birds on Colonsay where I was based did foraging trips of just over 30 km to an area around the Corryvreckan whirlpool just north of Jura where fish are pushed closer to the surface. There were also differences between years with good breeding seasons on Fair Isle resulting in much shorter foraging trips. This tracking work has identified feeding hotspots and has allowed us to provide recommendations and advice on placement of MPA’s. 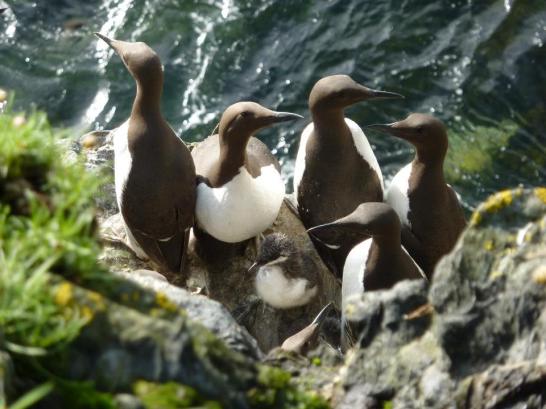