In the last issue of the Wee Vine we reported on the success of the archaeological dig held at the end of May when two Stone Age objects had been identified and we awaited the result of radiocarbon dating being carried out on a small piece of charcoal found in one of the trenches.

We now have that result, and that tiny piece of charcoal has now been confirmed as dating from around 983AD. This is very exciting news as it confirms activity at the Keir Hill at the time when Kenneth II of Scotland (Alba) was invading Strathclyde, the kingdom south of the River Forth.

Keir Hill of Dasher overlooks the Fords of Frew, which was one of the key strategic routes across the Forth Valley and which for millennia has acted as a funnel restricting movement of people and goods. The Chronicle of the Kings of Alba, which was written in Kenneth II’s time, records that in the late 10th century he fortified the banks of the uada of Forthin, which is generally taken to be the Fords of Frew (Watson 1926, 52-3). The Chronicle also states that he plundered Northumbria (which at that time extended as far north as the Forth) several times, reaching as far south as Cheshire. Coincidentally, the Anglo-Saxon Chronicle records attacks on Chester around 980AD.

It is of course all very tenuous; for example, we don’t know whether, by fortifying the Fords of Frew, Kenneth was defending his northern territories from raids from the south, or perhaps Strathclyde from further raids from the north, and we probably will never know but, whatever the answer, the dig has uncovered yet another aspect of Kippen’s early history. Kippen Heritage intend to continue the investigation with another dig planned for May next year. 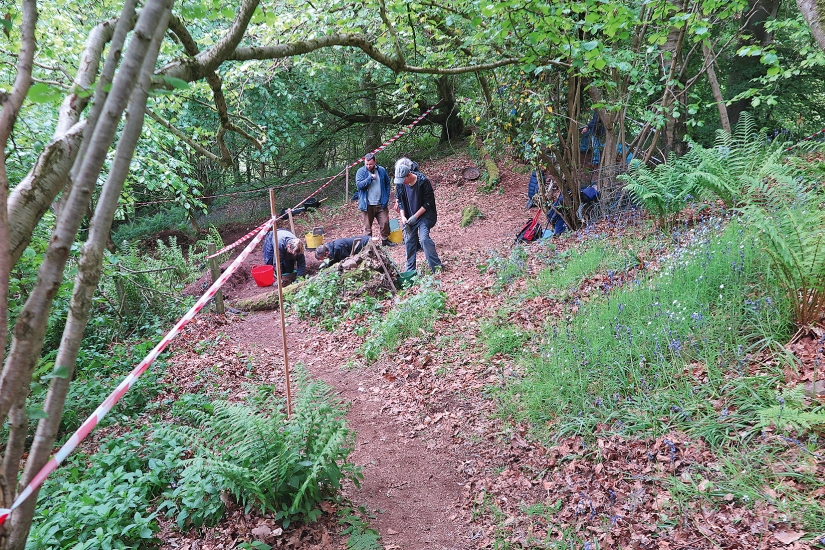 The archaeological dig held over the weekend of 24th, 25th and 26th of May was a great success, thoroughly enjoyed by volunteers, the Primary Schoolchildren and all who attended our open day on the Saturday afternoon.

In spite of the forecast of rain the weather remained fine, but the success of the event was in a large part due to the efforts made beforehand to set up the site for the dig ready for Murray Cook and his archaeology team.

Huge thanks must therefore go to Moira Turner and family who provided and set up the marquee which, together with two gazebos from the Street Fayre, added a festive touch. Also, many thanks to Hugh Aitchison and John Oswald who were towers of strength during the setting up and dismantling of the site and again to Moira who organised teas and baking. But special thanks to Jeremy Gaywood who not only permitted the dig to take place but was an enormous help in organising the whole event.

The purpose of the dig was to determine the earliest date of occupation of the Keir, as part of Kippen Heritage’s project to establish and record the origins of Kippen and its early history. It seemed appropriate, while fundraising to save the Old Kirk is ongoing, to progress with examining Keir Hill, which quite clearly was fortified at some point long before the Village itself materialised.

20 volunteers took part over the weekend in the actual dig, excavating and sifting through soil in several trenches, two being in the area of the ditch which surrounds the Keir, and which provided several tiny particles of charcoal. These have now been subject to microscopic examination by the Edinburgh- based AOC Archaeology Group in order to identify the timber species present. Only one small fragment was identifiable as being hazel and is suitable for further analysis; it has now been forwarded to another specialist unit for radiocarbon dating and results of that are awaited.

Other trenches were opened below the Keir, almost where the ground level reaches the flat Carse land, being at some point in the distant past a shoreline. Two Stone Age objects were found there and included in the report by AOC; a hand held ‘hammer stone’ for grinding and a sharp piece of flint, identified as a crude knife, establishing the area here, in the shadow of the Keir, as providing shelter and food for early Neolithic hunter-gatherers.

Altogether the event has served to draw awareness to the fascinating history which surrounds Kippen and, in light of the enthusiastic participation of all involved, it is hoped that similar events will follow in the future.

Thanks to all those who put their names forward at the Reading Room on 23rd February, Kippen Heritage now have a considerable list of over twenty volunteers which is great news; as our project progresses, assistance will be needed, not just to maintain the kirkyard, but to help at events.

Kippen Heritage would also like to thank all those who have either handed in a donation or donated via the Justgiving crowd-funding website, in order to raise funds to save Kippen Old Kirk. Also, many thanks to Kippen Street Fayre Committee and to Kippen Drama Club who have made substantial contributions and to the many people from home and abroad who have ancestors buried there and who have assisted financially.

The Justgiving website will continue to run until the end of April so, if you wish there is still time to help if you haven’t already done so, but please note that fund raising will continue until we have achieved our target £24,000 needed to save the kirk. To this end we have an exciting year ahead.

First of all, over the weekend of 24th, 25th and 26th of May, Kippen Heritage are holding an archaeological dig at Keir Hill of Dasher; this is all thanks to Kippen Community Windfarm Fund, Murray Cook, Stirling Council’s archaeologist, fast becoming a television celebrity, and Jeremy and Janet Gaywood on whose land the Keir is located.  (Keir Hill of Dasher is an earthwork on the edge of Cuthbertson’s Burn. It is a Scheduled Monument)

Keir Hill of Dasher and the adjacent field have long been purported to have been the site of a Roman camp, a very early Christian church and of course, the Keir itself, given its location, may well have been part of an earlier iron age settlement. The nearby St Mauvais Well suggests that the area was almost certainly the centre of an earlier community. It would be wonderful to find out!

A week before the dig David Smith, the Learning Officer from the Smith Museum in Stirling, will give the Primary School children a talk about the site and on the afternoon of Friday 24th the children will have a chance to come onto the site, when Murray will talk to them about archaeology and what we may find there.

Unfortunately, the site is too dangerous to allow the children to dig but, for a contribution to our fund, we are inviting adult volunteers (16+) to take part over the three days; so anyone who wishes to do so please contact Irene Chapman (kippen.kirkyard@gmail.com) with a note of days available, and preference for morning or afternoon, as numbers will be restricted due to limited working space.

On Kippen Street Fayre day on 9th June, Kippen Heritage will again open the Smiddy and the Kirkyard for guided tours. This year a fundraising Plant Stall will be located at Kippen Cross and, as now is the time to divide up plants, please don’t throw them out – pot them up and label them. A flyer nearer the time will provide more information regarding collection of plants.

The following is an extract from a “Tourists’ Guide to Kippen, Buchlyvie and Port of Menteith”, published in the early twentieth century.

“The King, with his nobles was residing in Stirling Castle, and having sent a party for some deer to the hills in the neighbourhood of Gartmore, on their return to Stirling with the venison they passed through Arnprior, where they were attacked by the Chief and relieved of their burden. On expostulating with Buchanan for so ruthlessly taking from them what belong to the King, Buchanan replied that if James was King in Scotland, he was King of Kippen.  The messengers reporting the circumstances to the King, he, relishing a Joke resolved to wait on his neighbouring Majesty of Kippen, and rode out one day with a small retinue from Stirling.  Demanding admittance at the Castle of Arnprior, he was refused by a fierce-looking warrior standing at the gate with a battle-axe sloped on his shoulder, who told him there was no admission, as the Chief was at dinner with a large company and could not be disturbed at that time.

“Tell your master” said James, “the ‘Guidman of Ballengeich’ humbly requests an audience of the ‘King of Kippen.’”

Buchanan, guessing the quality of his guest, received His Majesty with appropriate honours, and became so great a favourite that he had leave to draw upon the carrier as often as he pleased, and was invited, as “King of Kippen” to visit his brother sovereign in Stirling.”

Also, an old photo showing “Buchanan Street” – the old name of Fore Road, indicating that it led to the monarch’s demesne.