Three Kippen women met together informally for about year, sharing their passion for quilting, sewing, talking about quilting and learning from each other. They thought that others might enjoy such a group and so to identify interest a small piece was placed in the Grapevine in March 2013, inviting people to come to the Reading Room to discuss. On the morning of the meeting, we consoled ourselves with the thought that we would be happy if even one or two people came.

Nine women attended and were enthusiastic at the prospect of setting up such a group, agreeing we might have the start of something good. However, we soon learned that this was not a new notion for Kippen, as there had been a quilting group established for several years but which had ceased functioning. Some of those present had been part of that original group and were keen to participate in the formation of a new group. We made decisions re. venue, frequency of meetings, cost etc. and agreed a rough format which has been built upon since. The group runs on democratic lines without a committee, any decisions /changes being discussed within the group. There is no teaching as such but we help one another.

Several quilters from Aberfoyle and elsewhere then joined us and our total number now stands at 18. The level of skill ranges from novice to good although no one will admit to that. Quilters never think their work is “good enough”. Everyone works on whatever they choose to make and advice is available if sought. When it comes to layering up the three layers of a quilt before the top is quilted we often get together around the table and tack it as a group.

We have been involved in several projects:

The last three years have been tremendous fun and the group seems to go from strength to strength. The hum in the room can be heard at the front door with everyone sharing their knowledge and expertise. That is to be highly valued, but the friendships made are to be prized above all. They are an extraordinary group of women. Currently, we are at capacity for numbers but if anyone is interested in joining the group we will happily start a waiting list. 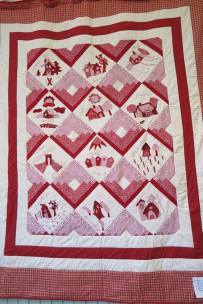