Hundreds of people turned up to show their support for the Kippen Street Fayre despite the typical Scottish ‘summer’ weather.

Rain failed to dampen the enthusiasm for the annual event which included a street parade, fun dog show, sausage-making demonstration and live music. The stall holders turned out in force with many new faces alongside the seasoned regulars.

People came from far and wide with one French tourist winning the prize for the furthest travelled.  The dog show, sponsored by Doune based vets Struthers and Scott, was very popular, especially the best tricks category which saw some great comical moments.

As always, the children entered into the spirit of things for the fancy dress parade which was based around the theme of Scottish Historical Characters – real and mythical. Reece Crawford steamed through the competition to scoop first prize in the Primary 1-3 category for his interpretation of The Flying Scotsman, closely followed by Florence Hood who came as Flora Macdonald.   Alfie James won first prize in the Primary 4–7 group for his Oor Willie costume with the group award going to Jenny Gardner, Holly Kenn and Maddie Anderson who came as the three witches from Macbeth.

Last year’s King and Queen passed on their crowns to the new regal kids on the block – Queen – Chloe Watt and King – Ryan Hawick who were ably assisted on the day with their attendants Alice Brownley, Teagan Finlay, Joe White and Ewan Milligan.

Nine year old Lily Bell also had her moment in the spotlight when her chilli, coriander and lime sausage recipe was picked as the winner in the sausage competition. Local butcher Cameron Skinner made her ‘Thai Twist’ sausages on the day as part of a demonstration which raised more than £70 for Kippen Contact the Elderly group.

The raffle went down a storm and raised more than £500 which will help support local organisations and charities.  A big thanks to the all the local businesses who donated prizes including  the Woodhouse, The Cross Keys, Rhubarb Lime, The Inn at Kippen, Briarlands Farm, Blairdrummond Safari Park, McQueen Gin, One Allan Park Wellbeing Clinic and Old Leckie Farm.

Old Play and Alan Stewart’s Ra Band, along with the lovely singer Anna McEachern, kept the crowds entertained and were eventually rewarded with glorious late afternoon sunshine.  The Kippen Street Fayre Organising Committee would like to thank everyone who came along and helped make the day a great success (despite the rain)! 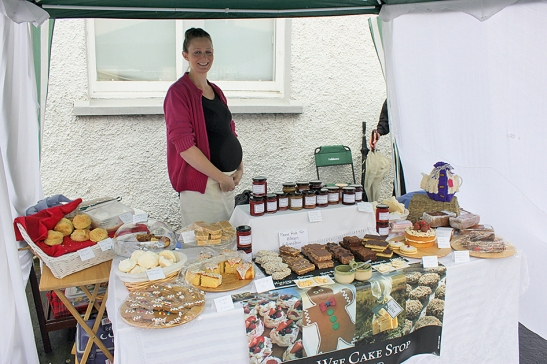 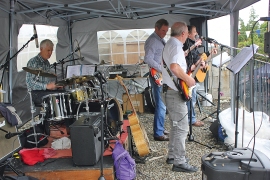