On Sunday 25th March Stirling County U18 Rugby Team won the Youth Cup at Murrayfield for the third year in a row.   A great honour for youngsters to play on the hallowed turf, nice day out for the families and friends too. Two Kippen boys were part of that winning team.  Lachlan Mackay, at prop, played for the team both in 2017 & 2018 and capped his second cup final appearance with a bullish performance and a try. Over the last 2 years Lachlan has been a significant part of a highly successful Stirling County U18 and played both Regional and International Rugby for Scotland.    Kippen’s second son was Keir Singleton, who played U16 Rugby for Scotland last year, but is in his first year with U18s.  Keir came off the bench onto the left wing with 5 minutes to go and much to prove, making a break up the centre of the field, resulting in Stirling’s final try, to seal a comfortable victory 29-5.

Needless to say there were some serious celebrations to follow! 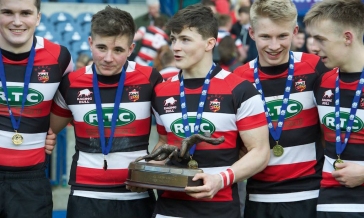