The archaeological dig held over the weekend of 24th, 25th and 26th of May was a great success, thoroughly enjoyed by volunteers, the Primary Schoolchildren and all who attended our open day on the Saturday afternoon.

In spite of the forecast of rain the weather remained fine, but the success of the event was in a large part due to the efforts made beforehand to set up the site for the dig ready for Murray Cook and his archaeology team.

Huge thanks must therefore go to Moira Turner and family who provided and set up the marquee which, together with two gazebos from the Street Fayre, added a festive touch. Also, many thanks to Hugh Aitchison and John Oswald who were towers of strength during the setting up and dismantling of the site and again to Moira who organised teas and baking. But special thanks to Jeremy Gaywood who not only permitted the dig to take place but was an enormous help in organising the whole event.

The purpose of the dig was to determine the earliest date of occupation of the Keir, as part of Kippen Heritage’s project to establish and record the origins of Kippen and its early history. It seemed appropriate, while fundraising to save the Old Kirk is ongoing, to progress with examining Keir Hill, which quite clearly was fortified at some point long before the Village itself materialised.

20 volunteers took part over the weekend in the actual dig, excavating and sifting through soil in several trenches, two being in the area of the ditch which surrounds the Keir, and which provided several tiny particles of charcoal. These have now been subject to microscopic examination by the Edinburgh- based AOC Archaeology Group in order to identify the timber species present. Only one small fragment was identifiable as being hazel and is suitable for further analysis; it has now been forwarded to another specialist unit for radiocarbon dating and results of that are awaited.

Other trenches were opened below the Keir, almost where the ground level reaches the flat Carse land, being at some point in the distant past a shoreline. Two Stone Age objects were found there and included in the report by AOC; a hand held ‘hammer stone’ for grinding and a sharp piece of flint, identified as a crude knife, establishing the area here, in the shadow of the Keir, as providing shelter and food for early Neolithic hunter-gatherers.

Altogether the event has served to draw awareness to the fascinating history which surrounds Kippen and, in light of the enthusiastic participation of all involved, it is hoped that similar events will follow in the future. 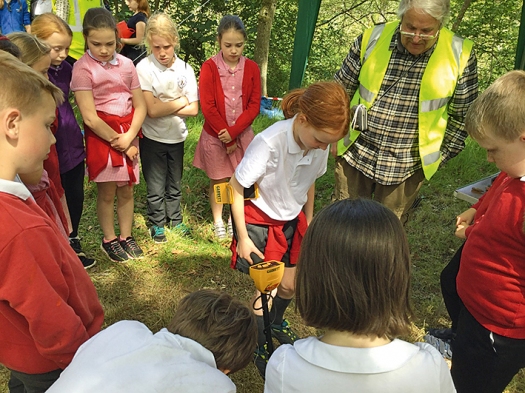 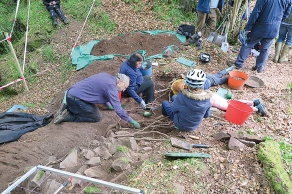