This wooden stone was commissioned by Jock Armstrong as a trophy to be played as an annual competition by Kippen Curling Club. The first competition was played in 2005 and was won by Robert Armstrong’s team, with other team members being Jean Chapman, Ken Smith and Marian Watt. Originally the competition was played at an away venue, with several games being played over a weekend. Latterly, it was a day’s outing at Greenacres.

In November this year the competition was played at The Peak Ice Rink in Stirling, with two teams of curling. Skip Margaret Armstrong, and team members John Rennie, Nander Robertson and Naomi Hirst, were the proud winners of the trophy.

Roddy McLeod, who lived at Dun Eaglais, turned the stone from various types of wood. Roddy’s business, before he retired, was Charles Henshaw and Sons Ltd, Iron Founders in Edinburgh. The business creates architectural features for buildings, and when Buchanan Galleries was built in Glasgow they installed the handrails for the gallery, and part of the wooden stone is made from off cuts of the maple handrail. Roddy was always on the lookout for bits of ‘spare’ wood, and the wooden handle is a piece from another commission at the Conrad Restaurant at No 1 Poultry, in London. Another section of the stone comes from echi wood which is a hard wood from Africa, the base being made from walnut, and the stone itself is mahogany. Robert Armstrong made a wooden box to carry this trophy. Altogether, it is a beautiful piece of work. Many residents in Kippen are proud owners of some of Roddy’s pieces. 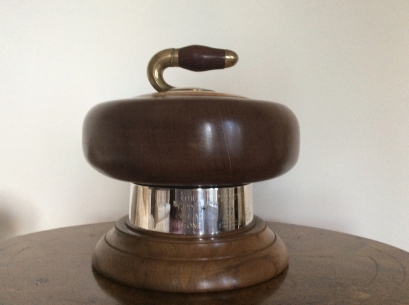 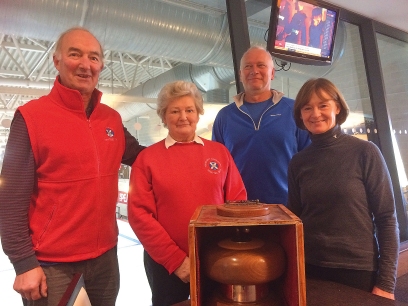