The 2019 Kippen Primary Nativity was called ‘Everyone Loves a Baby!’ Pupils had lots of fun performing this upbeat Christmas Nativity and enjoyed learning the lyrics, lines and dance moves. They told the story of six children who live with their parents, two kind innkeepers who have just had a new baby. The children were also involved in designing programmes, posters and tickets for the performance. We are very proud of all the pupils who worked hard for many weeks before it. Thank you to all who attended. We hope you enjoyed it!

I liked all the costumes, especially the camel costume. (Jamie)

The nativity was really good, and we all tried to sing nicely. (Emma)

I was a bit nervous first but then I felt just fine. I liked being on the stage and doing all the actions. (Isla)

As part of our work based on the story, ‘Owl Babies’, Primary2/3 dissected and investigated owl pellets.

We got to use magnifying glasses and microscopes to find out just what the owls had been eating. Using our identification chart, we think we spotted the jaw of a vole, some mouse bones and lots of other bits of fur and feathers. These were hungry owls!

“I enjoyed digging into the pellets and finding out what different things were in it.” – Harry

“It was great using the magnifying glasses. It made it easy to see all the little bones.” – Cara

P3/4 had a new class member this term – The Butterfly Lion! After reading the story, the children wrote to the lion keepers at the Safari Park to ask how to look after lions. As soon as the lion cub arrived, the children wrote instructions to explain how to take care of him. Having such an important, and cuddly, member of the class inspired the children to write poems, stories, posters and dances. They wrote news reports and carefully considered their own opinions about aspects of the story. Finally, they made models of the lion in clay to celebrate the end of an exciting term! 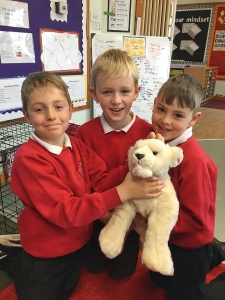 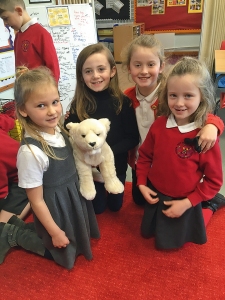 In P5/6, our topic this term has been the Titanic.

We have investigated these questions through a number of activities such as building circuits to practice Morse code, creating timelines of the journey, re-enacting the journey through drama and even writing our own survivor diary entries. We have even had Titanic memorabilia sent to us from the Belfast Museum to help us understand how some passengers may have dressed.

Our favourite part of our topic was being able to build a 3D replica of the Titanic by designing our own shoe boxes to represent parts of the Titanic.

We have been learning about our world through our topic ‘The Global Village’.

Through our topic, we explored numeracy, including fractions, percentages and graphs. We found out a lot of interesting things about the world we live in, and the similarities and differences between different countries.

“I liked doing all of the bar graphs. We all got a different topic such as religion, age, language etc. Mine was religion and I found out that there were many more religions in the world than I had thought.” Lomond

“I really liked doing my line graph because I had never done a graph where you could compare something over time and see the patterns as easily. Some of the results were quite shocking. There are a lot of chickens in the world!” Ailie

We even used our lines graphs, which showed sunset and sunrise over the year in Kippen, to create an art project which showed our changing seasons and how the world outside changes across the year.

We also used science to help us to explore challenges in some countries, such as finding fresh water.

“We had very dirty water and we all had to get into groups to make the water clean by making filters from different materials. The materials which worked best were the cotton wool and paper towels. I think that this was because they didn’t have any big gaps in them, so they caught all the dirty bits in the water.” – Emily

Through art we explored diversity by creating our own versions of the ‘Diversity Hands’ painting.

“We had to look at our hands and try to copy them in pencil. After that we created a good copy and added detail, then coloured them in using lots of different colours of pencil. I think that the message of this was that you are the same no matter what colour you are.”